Sadly, one of our founder members, Jack Shill died recently. We were able to make a presentation to Jack at the 2019 AGM, in recognition of his service to the Association. 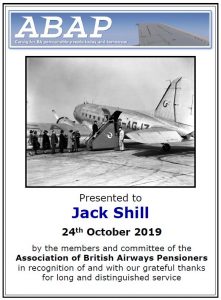 It is with great sadness that I have to report the passing of my long-time friend, he died in hospital on 13th January 2021. He achieved his 90th birthday on Christmas Eve.

Jack was a founding member of ABAP and was an original committee member serving as treasurer from its inception in 1990 until he was forced to stand down due to ill health in 2016, he did however continue as an active committee member until shortly before his death.

Jack started his career with the airline in 1946 joining BEA at Northolt in the cargo section. On transfer of activities to Heathrow in the early fifties Jack continued in cargo and then in 1965 he took the daunting step of joining the elite group of recently established Aircraft Dispatchers. This was a challenge well out of his comfort zone but opened broader horizons which, for the next 35 years, established Jack as one of those almost legendary people who was well known to all who worked with him in Terminal One, on the ramp and with aircraft operating crews. His dourness of disposition belied a humorous nature which quickly became apparent upon acquaintance.

Alongside his job he was strenuous in his support of fellow workers. He devoted many hours in the protection of his colleagues and in the maintenance of their working conditions.  Throughout those last 35 years of working life he was always a trade union branch committee member. He represented staff on the A scales administrative panel where he once had the temerity to remind the General Manager that seniority did not determine Chairmanship because rules also allowed staffside to exercise that role, he then promptly took over the chair. He served on numerous consultative committees and evaluation boards. I have never seen Jack overawed or intimidated by anybody and although he was no linguist he had an exceptional grasp of old Anglo Saxon when the need arose, as often it did.

When in 1990 British Airways sought to amalgamate  APS and NAPS, it was a given that Jack would involve himself in its opposition. ABAP was formed with Jack as a founding member. ABAP was instrumental in thwarting this amalgamation.

Through his trade union branch work he was well versed in the management of funds and so he naturally took over as ABAP Treasurer. In those first few years it became apparent that there was a need for pensioner representation with membership numbers growing in excess of 8000.

Management of such a large membership proved almost overwhelming at renewal time when Jack assisted by his wife Sylvia had to cope with postal sacks arriving at his home on a daily basis. The local sorting office complained as did one of his neighbours to whom sacks, on some occasions, were mysteriously being delivered in error. Payment in those days was made predominantly by cheque and their subsequent collation and presentation at his local branch of Barclays although daunting did not deter Jack. Subsequently this work was contracted to Asendia, a handling agency, through whom Jack continued to exercise his committee responsibility.

Jack and I have been friends for 55 years, we worked together, car shared with each other, nurtured a common and practical sense of service for our fellow workers. We knew each other so well that we involved our families socially, even holidaying together.

I knew my friend Jack better than most men and I shall miss him, I will miss his gentle sense of humour, his unpretentiousness, his fortitude and his common sense.