As many may know (writes Joel Kosminsky), my first employment was an unintended career in the airlines.  I had only taken BOAC’s management trainee tests to have days off school.  I joined the airline in Autumn 1969 and lasted until its successor, British Airways was prepared for denationalisation in 1982.

Here are three ‘adventures’ from my BOAC days…

This one of many, many adventures was in Summer 1970 at Heathrow’s Terminal Three in a world long, long gone…

I learn a new word

From the first meeting with BOAC employees, the airline had only been called by its spelled-out initials.  Like most ‘initialled’ carriers, we had spoof words attached to those letters.  B O A C was ‘Better On A Camel’ (we later tried ‘Concorde’ instead), and our sister State airline BEA was ‘Better Eat After’.  Many airlines suffered this – SABENA, the Belgian national airline was ‘Such A Bloody Experience Never Again’, one of the luckier spoofs.  Most bordered on the obscene, but TWA (Trans World Airlines, founded by the now strange recluse Howard Hughes) was ‘Try Walking Across’.  Some dis-satisfied passengers also called it ‘Travel Without Any Bags’.

Within the airline – I had not so far met anyone from any other airline – we were only called by those individual initials.  One day turn at Terminal 3, my emergency level French was hijacked.  No-one else on that shift spoke even the little I could manage.  I had had the advantage of learning French at school from French nationals, so whatever rubbish I was saying, it was at least pronounced right.  Air France had cancelled one of their New York – Paris flights, and we had accepted some of their passengers.  One was a bemused older man who spoke only French, had not really understood what was happening to him, and had to be escorted from our clutches at Terminal 3 to Air France’s welcoming hands at Terminal 2.

I had no illusions about my poor French, proven on the school trip to Paris in 1968, in the wake of the Spring riots there – to be used only when all else has failed.

“All else has failed,” I was told, not quite in those words.  Instead of being with Sandy, whom I was shadowing that shift as Bogenna (my rather nice Polish woman mentor) was on a rest day, I was to gently escort this lost bloke across Heathrow Central by transfer bus and hand him over to Air France, who were expecting him.  His baggage had been tagged through to Paris.  But he needed to check-in again before going to his home country.  Try not to speak unless you have to, the only practical advice which came with this task.

“Allez avec moi, s’il vous plait…” [Come with me please].  As I’d said it clearly, he immediately thought I was a fluent French speaker.  All the flight over, no-one had spoken French, none of our cabin crew had been able to communicate with him.  At least that’s what I thought he had said, speaking so fast I recognised only one word in ten and had to guess what he was saying.

“Malhereusement, je ne parle pas Français bien,” [Unfortunately, I do not speak French well], except saying it well let him think I was being modest.  He carried on at a speed which French TGV trains would years later have trouble keeping up with.

I delivered him alive and functioning to someone at Air France who spoke fluent French, already assuring him “l’avion est prêt”, the plane [to Paris] was ready.  As I started back to Terminal 3, the Air France woman called out in English – “Thank you, Bo-ac!”  ‘Bo-ac’?  Took me the length of the transfer bus trip back to Terminal 3 to understand what she had said – never heard that before.  She had pronounced the letters of our airline name as if it was a word.

Sandy was going spare – more than a bit blunt about leaving her command without telling her.  Not my fault, I tried to explain – I had been daft enough to claim I could speak French.  And I’d heard a new word.

“You’re old enough to have heard them all before,” she said.

Uniform rules were strict: BOAC was a military parallel in job titles, control, attitudes, chain of command.  No unbuttoned jackets, no rolled-back shirt sleeves, males’ ties properly knotted to cover the shirt’s top button.  Those of us dealing with passengers’ money weren’t allowed to have any on us while on duty.  We had to pointlessly obey the same rules at Victoria as at Heathrow.  In-town was hotter and more humid than air-conditioned Terminal Three.

Our heavy uniform jackets stayed on until BOAC’s Duty Room at Heathrow, deities on earth, issued their “jackets off!” command over the ‘Squawk Box’, the fixed one-way landline audio link from Duty Room to Speedbird Control at Hatton Cross, Passenger Services at Terminal Three who sent staff to meet incoming planes, Check-In’s office buried in T3’s ground floor north-west corner, Load Control on the tarmac in their self-contained pre-fab, Victoria’s Ops Room and who knew where.  Maybe even the Chairman couldn’t take his jacket off until Duty Room said.  We obeyed.

Duty Room staff weren’t ogres, just no nonsense, seen it, heard it, done it: they were moving planes around Heathrow, many with four hundred people on board.  Duty Room did not muck about, having made the paper others wrote books on, which their senses of humour reflected.

I was on night turn one summer morning at Victoria (‘Airways’) Terminal in central London, when the city was already naturally lit instead of by electricity.  Planes were coming in early, as strong North Atlantic tailwinds had pushed flights into Europe ahead of schedule.  The dawn chorus was still in its pyjamas when BOAC’s very full flight BA508 from New York had called Air Traffic Control from over the Bristol Channel.  ATC didn’t muck about either – plane in the air, wants to land, ok by us.  No need to ‘stack’, all air lanes open.  Never mind that PSU early shift at LHR hadn’t clocked on yet, that Customs, Port Health and Immigration were still enroute.  Heathrow’s night flying curfew meant only emergency flights came in, needing only token numbers for ‘dark hours’ duty.  Nowhere near enough to clear a jumbo load of four hundred bleary passengers still expecting another hour’s sleep.

Delighted at this open path to a proper breakfast on the ground, our 747’s cockpit crew forgot to advise Speedbird Control that they would be touching down much earlier than expected.  Heathrow had no cleaners to go on board after passengers had left the plane, no stand to dock the plane as no-one was there to prepare one.  The first we knew at Victoria, not that our colleagues at Heathrow were any wiser, was when the Squawk Box spluttered in resigned determination.  Words and delivery I would never forget – “the 5-0-8 has landed, unheralded and unsung.  It is somewhere on Heathrow Airport.  When we find it, we’ll tell you what we’re going to do with it, and what we’re going to do to the Captain…”

This tale is from Autumn 1973, at Victoria Terminal

How my career nearly took off…

One oldish friendly geezer, usually wearing a muted pattern suit hung around Victoria Check-In, maybe once a month in the later evenings.  I didn’t know who he was; he’d usually disappear just before we locked up, although I never saw him leave.  He was at ease with the world, stone-cold sober, and hadn’t been seeing anyone off.  One evening, not long after I’d started night turn, he began a conversation; his tales were fascinating, even allowing for the posh accent which usually put my guard up.

We were nattering away – me still new, only part of BOAC for a few years and him, who went a long, long way back.  His accent wasn’t really posh and he knew loads about Croydon, when it was London’s airport.  Everyone then knew every passenger’s name for each flight – not likely now we shifted them four hundred at a time.  Transport enthusiast me was lapping it up, asking questions, questions, questions.

I didn’t notice the late shift supervisor and DO cringing by the stairs which led to the Mezzanine level and our Ops Room while I rambled on.  A passenger came in, my turn to deal with him; the old geezer backed away as I answered the query.  When I looked up, the old man had gone.  The DO beckoned gently, the curled finger of authority summoning me.  Did I know who I was talking to?

“No…  Nice old bloke, knows a lot about the old days.”

Sir Keith Granville (born 1910, knighted July 1973, died 1990) was Chairman of BOAC and stayed in the corporate flat at the top of Victoria Terminal tower when Board meetings were due.  Keith Granville had started as a junior at Croydon, so I represented something he once was.  If that passenger hadn’t turned up, or had spoken to someone else, my airline career might have been very different… 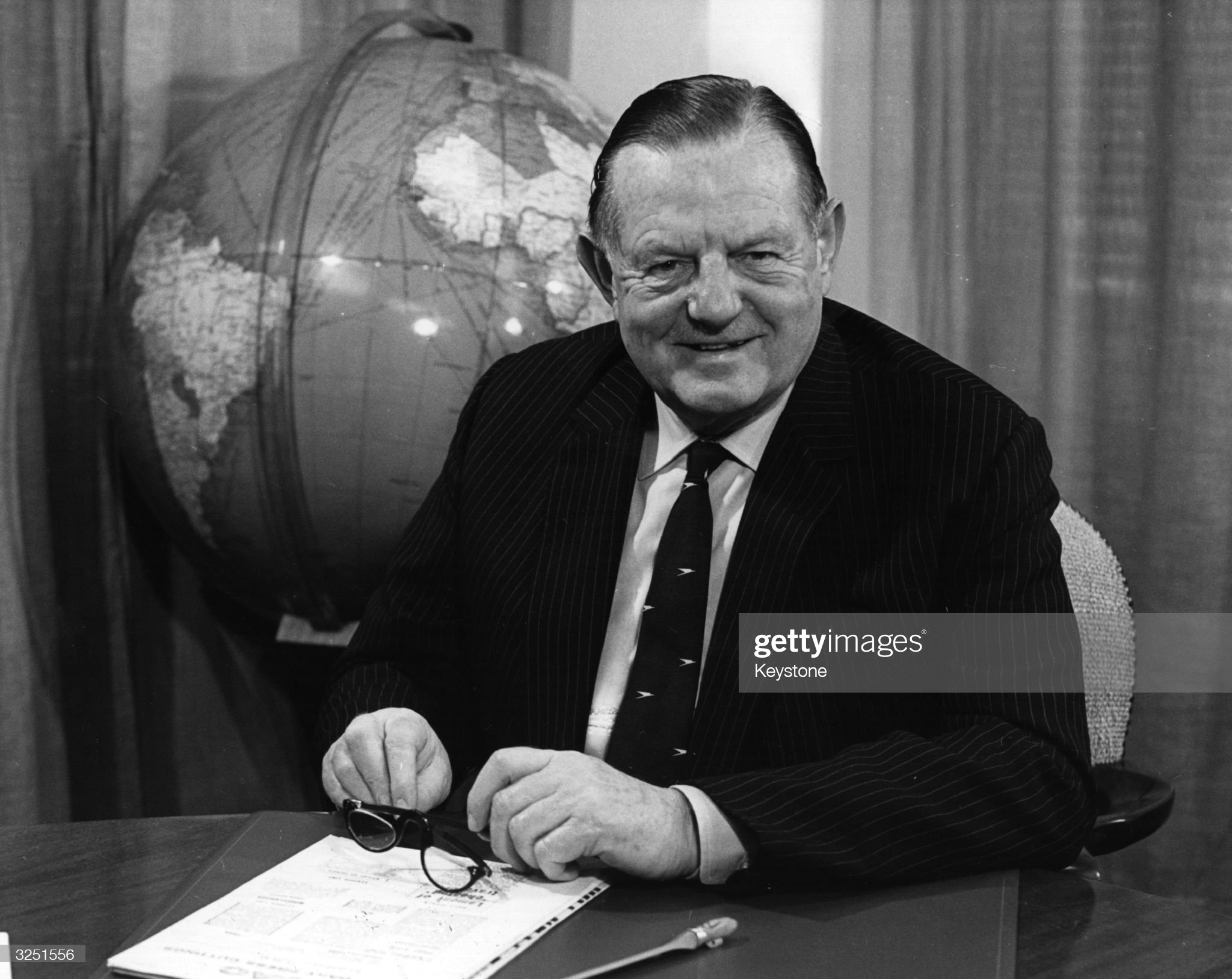 Sir Keith had liked the aviation business, but now it was just conveyor-belts.  The 747 was turning flying into travel by numbers and a non-event, raw revenue in volume.  That in theory was where the money would be, but the slow build of new passengers was making us almost insolvent, or that’s what my immediate bosses allowed me to believe.  When he retired, an era really did end.