Mrs. Myra Martin has sent us some reminiscences of her time at BEA.  She says “My husband and I worked for BEA/BA from 1962 until early retirement in 1982. They were 20 of the happiest years of our lives.”   Reading Myra’s account, they were certainly eventful!

In 1962 my interview with British European Airways wasn’t going well!

‘I see:  but you would like to work at Heathrow airport?’

‘No.  I thought the job was in Ruislip. I’ll go to Heathrow if necessary.’

I went home and told my husband:  ‘Not a hope in Hell.’  The acceptance letter came three days later.

Computers were a twinkle in somebody’s eye in those days.  In Flight enquiries we got our information from huge white-boards with the flights all listed and progress kept up to date manually by the Ops boys.  When fog enveloped the airport causing huge delays the telephone switchboards were swamped and we answered calls non-stop as best we could.  One irate man told me ‘I am in Ruislip High Street, and there is no fog at all.’  ‘Thank you,’ I said.  ‘Unfortunately, we are not landing in Ruislip High Street tonight.’

On night shifts we wiped clean the boards and they were ready for the next day. 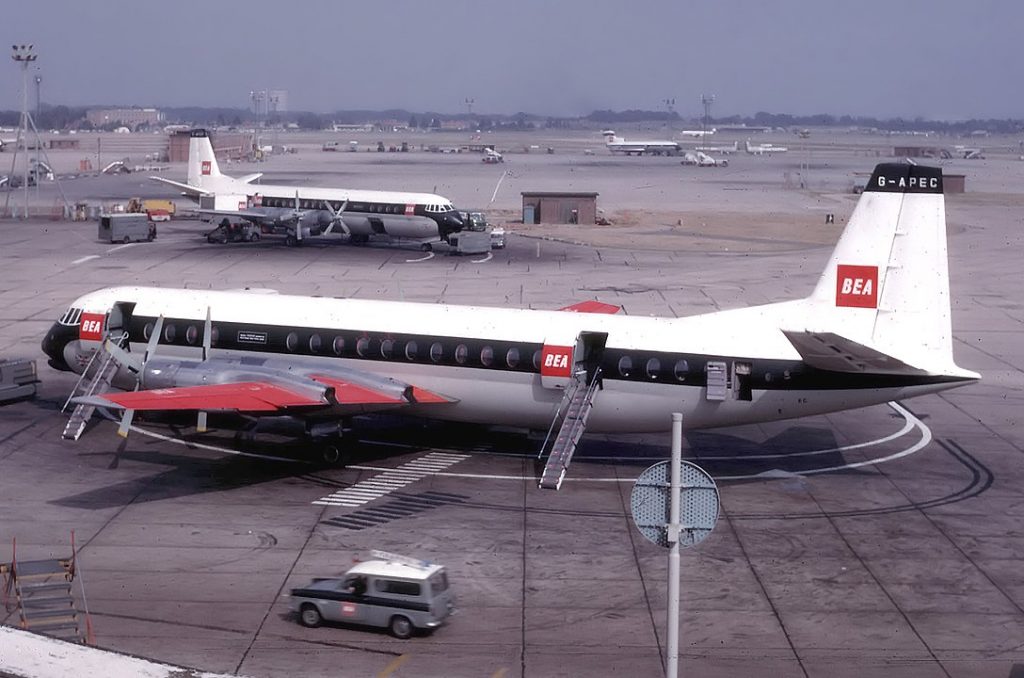 Two BEA Vickers Vanguards in the airline’s red, black and white livery sharing the ramp at Heathrow in 1965.
(By Arpingstone – Own work, Public Domain, https://commons.wikimedia.org/w/index.php?curid=2864028)

One of my jobs was in the Operations section – where we took turns to be Bealine London.  BEA aircraft called in as they made the last leg home.  They were either ‘fit’ for the next leg, or not.  Bealine London took the details and informed the engineers.

I was on night duty in the teleprinter room on the night of August 20th, 1968, watching for any world happenings that might affect BEA aircraft.  It was not a popular job, the noise was tremendous from all those chattering machines and you had to keep alert for hours while nothing relevant happened.  Then I saw a ‘no fly-over’ warning come up.  It was for Czechoslovakia and there were no BEA flights in the vicinity, but I took the message to the Operations Controller.  On August 20, 1968 the Soviet Union led Warsaw Pact troops in an invasion of Czechoslovakia.  Was I the first person in England to know that?

After a short stay in Flying Crew Rosters, I transferred to Cabin Crew, over on the North side.  The highlight of those ten years was without doubt a night in 1970.  I was a Duty Officer working with the Controller in charge and we’d got as far as 0240 without a hitch.  We were up on the third floor, above the Catering section, and we heard a door bang way down below.

‘Are you expecting a crew?’  Peter Cox frowned.  It wasn’t likely.

Moments after that our main door burst open and three masked men appeared.  They had stockings over their heads, and more to the point, they were carrying shotguns.  For one moment I thought it was a forgotten crew larking about.  ‘You could frighten somebody…’ I said.  Next minute I had a gun in my back and was being marched off towards the dark corridor to the unlit canteen and the Cashier’s office.

‘Use your loaf, Duck, and you’ll be alright,’ said my captor.  Kind words, because my mind was in turmoil.  The cashier girl saw me and came to the window.  ‘Open up or I’ll shoot her,’ the gunman said.

Peter and I, and the male cashier and his assistant, Bennie the female canteen manager and an Asian cleaner were herded into the office and told to lie on the floor – on our stomachs, while our hands and feet were roped together.  Almost worse than the discomfort, was lying next to Bennie – we were arch enemies.  ‘Ere,’ she told me.  ‘I’ve left the chips on!’

The chief robber was a nasty bit of work, with language to match.  He hit the cleaner because he wasn’t responding quickly enough.  ‘He doesn’t speak English,’ I said.

‘If the bird in red speaks again, knock her out,’ he told his accomplices.  While they loaded a sack-truck with boxes of envelopes, he kept up a dialogue.  ‘If the police come, we’ll shoot them.  When we leave, we’ll leave a sentry for five minutes, if you move, we’ll shoot you.’

When the early shift came in we got rescued.  BEA drove us home, but I was later than expected.

So I did, and then I told him again.  NOW, he was listening!